The Hub / Blog / Using the Gigzine app for audience interaction 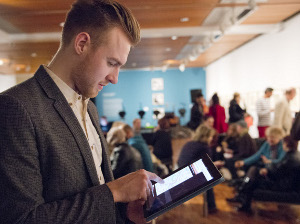 Steve Symons will be giving us a live demonstration of his audience engagement app at Friday’s One Dayer. If you’re coming to the event, you’ll get a chance to test out how Gigzine works as a voting app – during the Pitch Party – giving you a chance to tell us which pitch is the best game-changing idea. Here’s what Gigzine’s all about.

Can you explain what Gigzine is?

Gigzine is a set of tools that facilitates linking audiences via their mobile device to a venue, or event that they are attending. The system is WIFI-based in order to better service from strange adhoc venues to larger audiences. Once at an event users can either access a Gigzine system through their mobile’s browser or via the Gigzine App, in the latter case downloading movies and music from the venue can enabled.

As well as the commercially focussed lures of media “give aways” and information of upcoming gigs (in effect a version of the venue’s website), the system has been used to create interactive playlist based performances, to control visuals at events and a 4 channel audience controlled installation.

How did you come up with the idea and how does it enhance live events?

Gigzine is built on enhancing the concept of “Something Somewhere” – a sense that you have to be there to access content rather than the “Anything Anywhere” pedalled by mobile networks. This idea arose in 2011, during a “New Music Plus…” project funded by the PRSformusic Foundation, partnered with the seminal Band On The Wall venue and supported by the hub, I was invited to imagine what the BOTW would be like in 10 years time but to also create an event ‘now’.

Very quickly we decided that the event was going to have to involve some form of audience interaction playing on the idea of jukeboxes. I distinctly remember saying that I would not write an App, however this became inevitable after a long discussion, with Gavin Sharp, about collecting ticket stubs and comparing that to filming gigs on your phone. Ironically this App has become less important as we exploit the WIFI based event interaction more.

The Gigzine launch event is a good example of what can be done with the system. We commissioned The Bays to develop a set list based on BPM and themed Playlists. In order to maintain an overall integrity to the performance Andy Gangerdeen, drummer, could navigate which playlist was active at any one time, whist the audience could vote for tracks within the playlist. The Bays used the most voted for track in a playlist as the basis for improvisation with the provision that they ‘had’ to at least play an intro, even if they actually wanted to play Track 2 or 3. We also invited the audience to submit images against the playlists which were then used in drum-synchronised projections. The audience could create loops of 8 images that they could submit to these projections.

If that wasn’t enough we also has a series of Gigzine Pages that people could download onto their App. These are multimedia based pages in a magazine format, i.e. big glossy pages that you then zoom into, that contained video and music as well as text and images. The Bays used this to release new material to the audience, as well as just seen video and just heard audio. We also had a live review written during the performance for the more word based audience members!

How will it work in the Pitch Party?

I will bring an extreme adhoc mode Gigzine system with me consisting of WIFI and server. I use this touring system for places where I have no idea what to expect (a field, warehouse or park say) and so a self-contained unit is best. Obvously I’d prefer it if Gigzine was already fully integrated into the venue’s WIFI.

The Gigzine server will be loaded with some simple information about each of the pitches (we’d best avoid video content as the Pitch Party is a very short sharp event). You will be able to register you approval for each project via a Clap/Tap-o-meter.

I have to point out that this is a experiment! I have talked to several other people who create mobile interactive gigs and they all agree that its really hard to get 100 odd people into a room to actually test kit does what it says its meant to. Having a large number of people suddenly logging into the system and then all at once trying to access data is a nightmare scenario……

The Clap/Tap-o-meter is an initial exploration into the Gameification of feedback, can we get better and more feedback from visitors if we make it fun!?

What do people need to do to access it on the day?

Their smartphone. There is no need to install an App.

Simply join the open Gigzine wifi and then open a new browser tab and go to your home page. The Gigzine server will capture this request and redirect you.

Will it work on any phone?

Pretty much anything on Android will be fine, several people on ancient Nokias have also had no trouble. An iPhone should also be fine. To be honest Windows is right pain as it always tries to access a number of Microsoft URLs and hates closed WIFI networks, so you will probably be better off borrowing someone else’s phone. Sorry.

As ever there is a massive range of technology out there…..

Why are you excited to be part of the #OneDayer?

In terms of Gigzine it’s a great opportunity to test ideas out with an in-profession audience, though nerve-wracked might be more appropriate! There is also a great line up to listen to, Gigzine started in 2011 so its almost old-school now so I am really looking forward to hearing what else is happening.

I have been thinking about Personal Digital Advocates a lot recently, not in terms of Siri or Ask Google, but how we could carry around a device that partly validates who we are in the digital world, but could also present ‘me’ to the digital world rather than that happening through a third party like Facebook, Twitter or Instagram.

For the full One Dayer programme and speaker-line up – go here.

Kate Molleson reviews the giant, colour-coded instrument that anyone can play – commissioned as part of the New Music Plus… initiative Sarah Kenchington... Read More

A manifesto for the curious and the generous

I’m writing this from Liverpool, where I’ve been for the past 2 days for the inaugural Binary Festival, a brilliant get together of... Read More

The secret of growing your own business – What I’ve learnt

The hub’s intern Brenda Maleco talks about what she learnt at the recent Joining the Dots Away Day  On the 10th October I... Read More