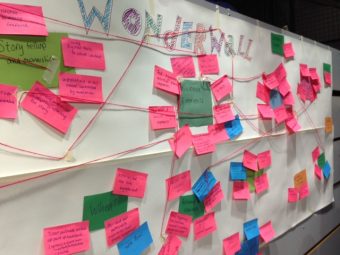 Imagine the scene – 25 or so of the UK’s most curious and forward thinking theatre makers, creative technologists and technicians, gathered together at Unity Theatre, Liverpool for 3 days of plotting and conspiring, eating and drinking, thinking and doing. All in the name of exploring the next frontiers of live theatre, and how digital technology can most creatively play its part in that.

Well that was pretty much what happened at the HackStage Ideas Lab that we teamed up with Unity Theatre and DoES Liverpool to make happen. Borrowing from hack culture, but with a healthy dash of the intelligent playfulness, curiosity and generosity that hallmarks our work here at the hub, HackStage gave our carefully curated group of fellow explorers the chance to do just that: make stuff that they can’t make on their own, do things that can’t be done under their individual steam, and shape each other’s thinking into new ideas that none of them could have come up with on their own. Now you see why we called it HackStage…

Like all of the work the hub is involved in making, HackStage had at its heart a central question, something we want to understand more about. In this instance, it was all about exploring how theatre makers, creative technologists and technicians can work together to re-imagine theatre and how audiences can interact with it – on stage, digitally and in settings which marry the two together. It’s a subject that we and our old friends at the Unity have spent many an hour debating, usually with the aid of distinctly old school pencils, paper, crazy drawings. So, like all good R&D projects tend to do, HackStage has developed iteratively, powered by ongoing discussion and informed by the work we’ve both been doing in recent years around the opportunities that tech presents for us in the arts.

The fabulous Annette Mees and Sarah Ellis from the RSC kicked things off with some truly headspinning thinking and provocations, and then we were off. Over the course of our three days together, we shared our inspirations and pooled our ideas, and got down to some serious playing, making, breaking and putting back together again. Of course, Hackstage was as much about catalysing new relationships that will have a lasting impact on those in, as it was about ‘in the moment’ results. However, here’s a quick round up of the ideas that we ‘hacked’ over their 2 days together:

Team Cue360 explored immersive theatre, experimenting with 3D sound and vision as a way to develop a new type of theatre. Their pitch gave a live demonstration of a 360degree immersive theatrical experience in which the audience is at the centre of the action (and can even be a character in the unfolding story).

Polyspective starts with the premise “if you walk my path, you&#39;ll walk my story”. A series of zones or rooms become immersive environments in which sound, temperature, film, lighting, or things can be triggered by wearable tech. You don’t just hear the story, you feel it, and a single set can become a series of sets depending on who is in the room.

Finally Spandex Badger gave us Pantovision! Through a series of hacked toys including squeaky pigs, inflatable guitars and LED lights they looked at how props and objects can extend the performance space and blur the line between performer/audience.