The Hub / Blog / The One Dayer Lowdown

The One Dayer Lowdown

Julia Payne, Director of The Hub explains what next month’s #OneDayer is all about.

So the One Dayer is for anyone who works in independent music – artists, promoters, managers, labels, everyone with an interest in the music. In a nutshell it’s about three things: where technology is going to take us, where the money’s going to come from, and how we can grow our audiences. Why these three themes? Well, because they’re what people working in the industry told us they needed to know more about. It’s difficult to keep up sometimes, when you’re busy running your own career or business, so The One Dayer is about galvanising people, helping them get inside all this stuff.

The One Dayer is part of the hub’s Joining the Dots project. What was the starting point for the project?

Joining the Dots is based on two premises. Firstly that if the music industry continues to cling to old models we’ll all be a bit, well, buggered. And secondly, that we’d all be a bit savvier if we shared what we know with each other. Joining the Dots is basically about encouraging people to take action, find  new models, new ways of making a living from the music we love, and new ways of getting people to love it as much as we do. We’re doing that in two ways. First up, we’re funding people to test new, potentially ‘game changing’ ideas. And secondly, we’re running a load of live events and webinars focused on technology, marketing and fundraising.

So, what will people get from coming to The One Dayer?

Well, my goal is for everyone to go away feeling three things. Firstly galvanised, that they’ve picked up loads of really practical stuff that they can go away and make happen straight away. Secondly, that they’ve stepped out of the day-to-day and thought about the ‘big picture’ that tends to disappear in the struggle to just keep going. And finally that they feel better equipped to face the future, more inside the change around them. If I had to pick one word I hope people will leave feeling galvanised.

Joining the Dots: #One Dayer – Finance, Technology and the Future of Independent Music costs £40 and takes place on 12 September at Cecil Sharp House, London, 12.30-7.00pm. Book your tickets HERE.

The One Dayer is part of our Joining the Dots programme, funded by Arts Council England, Esmée Fairbairn Foundation, Cultural Institute at King’s College London and Musicians’ Union, with support from The Guardian, Kings Cultural Institute and the English Folk Dance and Song Society. The Pitch Party is sponsored by PRS for Music.

Join our team! We’re looking for a p/t freelance comms and content hubster

Founded in 2002, the hub develops new thinking and practice in the creative sector. A social enterprise, we have a particular passion for... Read More 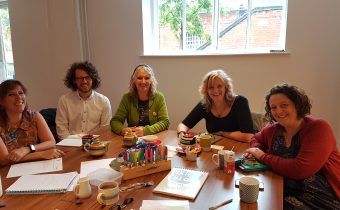 Action learning is a bit like group coaching…. Imagine having a team of brilliant, inspiring coaches –  working with you to help you... Read More