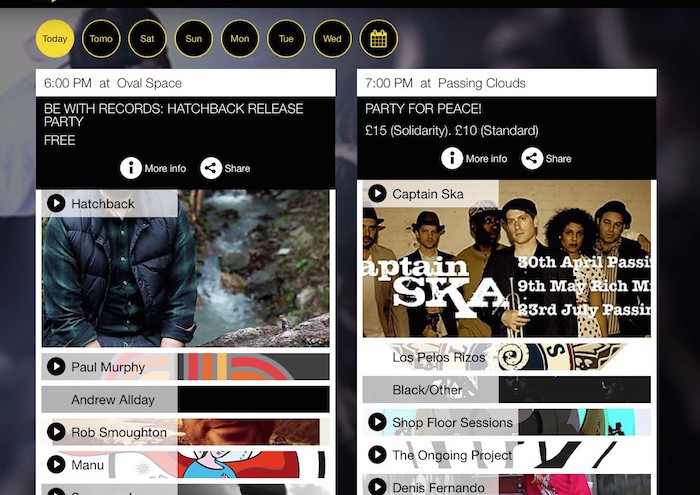 EventBox is a mobile app and website that lets you listen to gig listings to discover music events happening nearby.  It was supported to market through the hub’s Joining the Dots programme.  Here CEO Joey Baxter charts the process of bringing an idea to fruition.

When we started Joining The Dots in March 2014, we had a scrappy iPhone prototype. It had little style to the design with dots on a map of London that played music when tapped and showed some rudimentary details for an event. We were certain of the possibilities of the project: that it could make it much easier and enjoyable for people to discover live music happening nearby. And that there were ways we could build out the platform that would also further support the venues, promoters and artists that make live music happen. We had an ambitious timeline that saw us UK wide within 6 months.

So where are we are we at 16 months later? A key decision along the way was that we should launch in Dalston, London. Quite possibly the most concentrated music scene in the UK. We were agreed that to be relevant and valuable we had to be comprehensive. Figuring out how to be comprehensive proved to be a big challenge. Although we received approval last September from Apple for our rather gorgeous looking iPhone app, we were able to fill it with events. It took us till December to have a full roster of events for all venues in Dalston. We were then able to put them live not only on the iPhone but on the web service we had also built. In the face of many companies going mobile only we were determined that ours be a full platform play. Market data clearly confirmed our belief that the majority of people still look for any buy tickets using their laptop or desktop. Also, going web too was a critical part of our strategy for supporting venues, as I’ll come to later.

So we were ready to go live in December 2014, right? Wrong. We soft launched. We put the product in front of lots of people and got feedback that put us back to work on needed improvement. By February we were confident enough in the listings we had to start approaching some venues. We wanted to find a way for them to use the listings we had created containing images and music for the artists they had booked to perform. One venue in particular was floored by what we had done. We quickly hacked together a solution that redirected users from the “What’s On” section of their site to the listings we had done for them.

So we were ready to really push the marketing button right? Wrong. We soon figured a world of issues with keeping the listings up to date. We also found that while the venues loved what we were doing, they also loved their own sites. If only we could put our listings within their site. With another massive push, a massive shout out here to eventbox’s Chief Technology Officer Artur Bodera for his relentless and brilliant problem solving/solution finding, we were ready come May 1st to fully launch. We had employee number 1 on board to manage the listings, a back end that pulled in, updated and auto-matched events with content for artists performing, web and mobile event discovery platforms, widgets that could plug into venue sites and the most comprehensive live music listings that have ever existed for an area of London.

Since then we’ve been really pushing the marketing. We have built a performance analysis solution that has helped us figure what marketing channels work and best and what product changes we ought to prioritize. We have integrated our listings into three venue sites and have two more lined up for integration. And we created our first listings for a festival www.eventbox.fm/landofkings

Our user base is growing rapidly. We have confirmed certain aspects of the business model and have market validation for other aspects of the model that we need to build out. We know what we need to do to scale the operation London wide and beyond and how much it is going to cost. We have just started pitching for the investment needed to make that happen.

The money from Joining the Dots has been critical. From essential purchases, to travel for the founding team to meet and work for intense periods, to paying to keep me going. And being able to say we won the competition has brought us credibility.

But being part of Joining The Dots has been so much more than that. It has been a ticket into the heart of the music industry. It has assisted each stage of development by providing a sounding board and by opening doors. It has been a place of sharing ideas within a community who share a desire for the same ends as eventbox: to bring more live music intro more people lives and to support the people who make it happen. 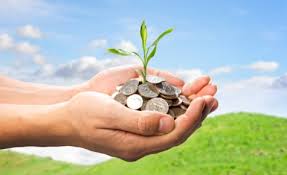 Our recent call for proposals for our Joining the Dots funding resulted in a mountain of applications – over 150 people submitted a... Read More 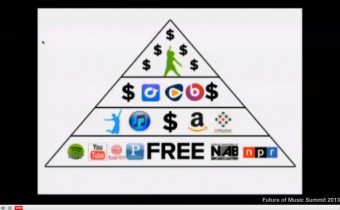 In search of maverick new models…

Over the last few weeks the future of the music industry, who controls it and the role of technology has been under the... Read More 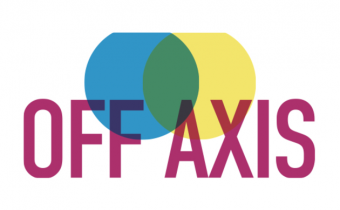